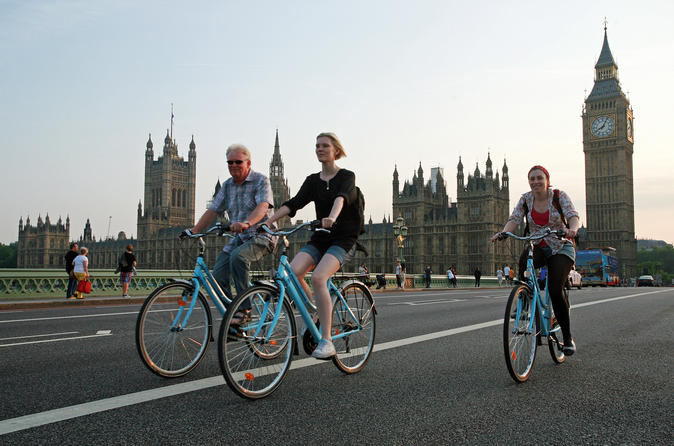 Get up close to some of the most powerful and historic buildings in the world on this 3-hour bike tour of central London. Follow a guide as you take in the architectural diversity of Westminster, Buckingham Palace, and St. Paul’s Cathedral; explore the bustling Covent Garden; and brush shoulders with the bronze lions in Trafalgar Square.

Classic London is our most popular tour of central London, covering the classic sights that light up the capital's skyline from Westminster to the City of London.

Your journey starts from our cycle hire and tour centre in Lambeth, conveniently located a stone’s throw away from Lambeth North Underground station.

Equipped with a bike and all safety equipment, your guide will lead you past Archbishop’s Park and across Westminster Bridge to the Northern side of the river.

Here you’ll cycle right under Elizabeth Tower, with Big Ben towering over you. Stop in Parliament square to enjoy great views of Westminster Abbey and the Palace of Westminster right under the gaze of Winston Churchill, before heading off to Buckingham Palace – via St James’s Park – in time to catch the Changing of the Guard*.

If you're in luck, the Royal Standard flag will be raised and you may catch a glimpse of the Queen as she takes up residence in her 'office'. From here it’s straight to Trafalgar Square to see Lord Nelson on his pedestal, guarded by bronze lions and adorned with elegant fountains.

Next you'll head to the cobbled streets of Covent Garden, an area renowned for its high-quality restaurants and lively street performers, before heading south through the intricate alleys and timeless passageways at the heart of London.

Then it's time to head towards London's oldest quarter and enter the heart of the legal district, where you’ll make your way past Lincoln's Inn Fields and follow the old cattle routes to Smithfield Market, a place with a turbulent past and gruesome medieval history.

A pedal ride later and you’ll find yourself eye to eye with the awe-inspiring St Paul’s Cathedral, and learn of its centuries of rich history.

You’ll then coast gently downhill and onto Victoria Embankment and its East-West Cycle Superhighway - London’s latest exciting initiative to improve cycle safety, and a cycle track completely free from traffic!

Here at the first stop on the boundary of the City of London and the Metropolitan capital, you’ll be enlightened on how the river became slimmer in the 1800s, while feasting your eyes on Cleopatra’s Needle. As you cycle on, be eclipsed by spectacular riverside views of the Southbank with its iconic London Eye.

Passing within a stone’s throw of Whitehall and the house at 10 Downing Street where the Prime Minister lives, you’ll continue back on past Big Ben and return back to where you started via Westminster Bridge, stopping to grab a quick selfie on the way!

Get up close to some of the most powerful and historic buildings in the world on this 3-hour bike tour of central London. Follow a guide as you take in the architectural diversity of Westminster, Buckingham Palace, and St. Paul’s Cathedral; explore the bustling Covent Garden; and brush shoulders with the bronze lions in Trafalgar Square.