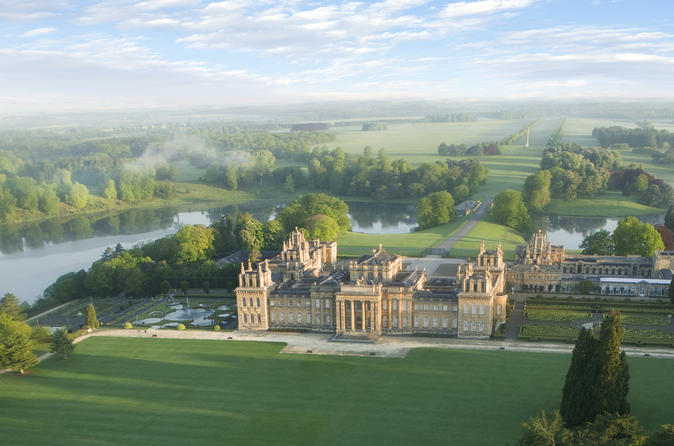 Enjoy a guided tour of England's beautiful Cotswolds region, with lunch included in an old English pub, before ending the day at Blenheim Palace, the birthplace of Winston Churchill. This is a 9 hour day trip with a maximum 16 people per tour transported by an air conditioned minivan.

After a pick up 7:30am pick up from Central London, begin the day by escaping London city life, and watch as the scenery changes to stunning countryside, streams and honey-colored cottages. The tour will drive through beautiful villages until arriving at Burford, the elegant market town known as the 'Gateway to the Cotswolds'. Here you will take a guided walk to the 900 year old church of St John the Baptist and see unique woolsack tombs and historic memorials.

After some free time you will depart and drive over to Bibury "the prettiest village in England" according to the art critic and writer William Morris. You can walk along the picturesque Arlington Row, one of the most photographed group of cottages in the country dating back to the 17th century, alongside clear trout filled streams and the village green. A single track country lane will take you up further up the Coln Valley and onto the 2,000 year old Roman Fosse Way. Along this delightful secluded valley the tour will make a stop at the ancient stone church at Coln St Dennis, then onwards to Bourton-on-the-Water, the 'Little Venice of the Cotswolds' with its stream running through the center of the village and a series of stone bridges. Picture postcard houses nestle either side of the River Windrush as the tour follows the narrow lanes up to Stow-on-the-Wold, the highest town in the Cotswolds. This attractive market town was the center of the wool trade in the area when up to 20,000 sheep would be bought and sold at the annual fairs! It is the highest of the Cotswolds towns standing on the 800 feet high Stow Hill. Explore the area before our delicious lunch (included) at one of the finest pubs in the Cotswolds.

You will then continue the guided tour down to Woodstock and the magnificent Blenheim Palace, the birthplace of Sir Winston Churchill. This stately home was designed by Sir John Vanbrugh and built between 1704 and 1722 for Sir John Churchill as a reward for defeating the French in the Wars of Spanish Succession. Beautiful landscaped grounds designed by Lancelot Capability Brown surround the Palace. Explore the opulent interior, see the room where Sir Winston Churchill was born and marvel at the great dinning hall and library. A wonderful way to end the day before our return to London.

On the return to London your driver will drop you at Victoria Train Station in the city center. This is one of the largest transport stations in London, with excellent connections to all parts of London and beyond.

Enjoy a guided tour of England's beautiful Cotswolds region, with lunch included in an old English pub, before ending the day at Blenheim Palace, the birthplace of Winston Churchill. This is a 9 hour day trip with a maximum 16 people per tour transported by an air conditioned minivan.