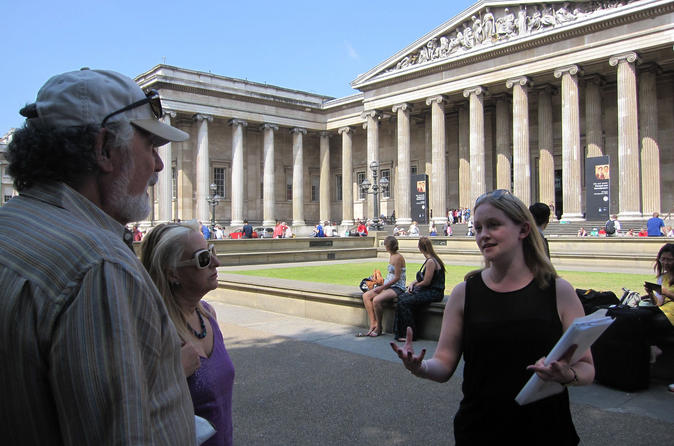 A small group visit to the British Museum with a historian.

This walk explores how the British Museum came into existence in the mid-eighteenth century during the period of Enlightenment, so called because of people's desire to re-examine received ideas and explore new ones using different methods of collecting data.
During the Enlightenment period different disciplines were born, among them archaeology, art history and the study of languages and scripts.
We will look at some of the antiquities and languages of ancient Iraq and Iran as material from these areas forms some of the earliest collections in the British Museum. Large-scale excavation in the ancient Middle East and the race for deciphering of hieroglyphic and cuneiform scripts were inspired by the finds from Mesopotamia and Persia. The beginnings of the British Museum are inextricably tied to the European re-discovery of these ancient cultures.
We begin our walk in the Enlightenment Gallery where we will talk about how archaeology evolved from the work of antiquaries; how art history was born with the study of ancient Greek sculpture and vase painting, and how Greek art set the standard for the next 200 years of what was considered the model of fully evolved art. We then move onto discussing how ancient texts came to be deciphered in the first place and we will compare the ways in which hieroglyphs and cuneiform, the two earliest scripts, were cracked.
Our discussion will be illustrated by the Rosetta Stone which now lives in the British Museum, along with about 130,000 pieces of cuneiform tablets from ancient Iraq, some of which are on display. Depending on the interests of your guide and the group, we may then spend time looking more in depth at the art of ancient Iran and/or of ancient Iraq in its earlier phases, before taking in the palace reliefs of ancient Assyrian kings, which form the best collection of ancient Iraqi sculpture outside of Baghdad. If time permits, and we are in the mood, we may take a peek at the Parthenon marbles, which will bring us back to the beginning of our discussions of what the 18th and 19th century European viewer perceived as the highest art form.

A small group visit to the British Museum with a historian.